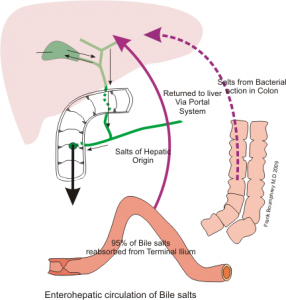 Bile fluid is produced in the liver (approx. 900 ml /24 h) and stored in the gallbladder. Together with the pancreatic secretions, the bile is released into the duodenum and reabsorbed and reused in the enterohepatic circulation. Bile is necessary for good digestion and contains bile acid, cholesterol, phospholipids and bilirubin, fatty acids and proteins.

During food intake, bile acid is released into the small intestine, where it helps to break down the nutrients especially fats. This enables the body to absorb the fats. Bile acids act as a “solvent” for cholesterol and support the absorption of the fat-soluble vitamins A, D, E and K. The bile acid is reabsorbed into the bloodstream at the lower end of the small intestine (terminal ileum) and returned to the bile acid circulation. In addition, the bile fluid reduces the acidity of the food from the stomach.

Bile acid that is not reabsorbed ends up in the colon where it does not belong. There it prevents the reabsorption of water from the colon and stimulates peristalsis. As a result, liquid stool is excreted, is partially uncontrollable and can thus also lead to incontinence.

This phenomenon is often described in connection with irritable bowel syndrome. However, a group of urological patients can also be affected: patients who have received a bladder augmentation or a neobladder and for whose reconstruction the terminal ileum was used.

Symptoms
• Diarrhoea (Chologene diarrhoea)
• Fatty stools
• Cramp-like pain, which is often relieved by abstinence from food.
• Low levels of fat-soluble vitamins A, D, E and K can be associated with the loss of bile acid.
• Since the bile acid is not reabsorbed, there is a deficiency of bile acid in the gallbladder. This can lead to gallstones.

Causes
Causes of the bile acid loss syndrome are diseases of the ileum (Crohn’s disease) but also surgical interventions using parts of the terminal ileum, e.g. bladder augmentation or neobladder.

Often an acid-binding agent – e.g. cholestyramine – is administered on a trial basis. If the diarrhoea and other symptoms are thereby eliminated, it can be assumed that the cause of the diarrhoea is bile acid loss.

SeHCAT test (SelenoHomoCholic Acid Taurine test)
Nuclear medical test for the diagnosis of bile acid loss syndrome. Radioactively marked bile acid (selenohomocholic acid taurine, Se-HCAT) is administered orally and then measured with a whole- body counter. The measured values can then be used to calculate bile acid excretion. The test is not a routine procedure.

4C-glycocholate breath test
After oral administration of 14C-glycocholate, there is increased exhalation of radioactive carbon dioxide. This is caused by the increased bacterial metabolism of bile acids in the large intestine  colon). The procedure is rarely used. Detection of bile acid in stool using enzymatic, chromatographic or mass spectrometric methods is only carried out within the framework of scientific studies.

Therapy
If possible, search for and treat the cause of the loss of bile acid (e.g. Crohn’s disease).

The symptoms of diarrhoea after neobladder or bladder augmentation can be positively influenced with exchange resin (cholestyramine). The correct dosage for treating the symptoms while preventing constipation should be determined empirically.

In the case of bile acid loss syndrome after using the terminal ileum for a urological operation the diarrhoea stops immediately after taking the first dose of cholestyramine.