The EAUN has built good links with China and Hong Kong over a number of years and this year the EAUN was invited again to collaborate with the Chinese Urological Association of Nursing (CUAN) and Urology Nurses Association of Hong Kong (UNAHK) to run five joint conferences and workshops across China  and Hong Kong. 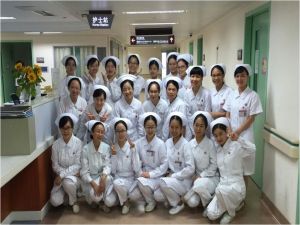 Nurses on the ward in Guangzhou

Previous years have covered prostate cancer but this year the requested focus was on bladder cancer.  Two board members Paula Allchorne (EAUN Chair Elect and Nurse representative of the Action on Bladder Cancer Charity) and Lawrence Drudge-Coates (EAUN Past Chair) were chosen as expert EAUN speakers to join an experienced CUAN and Hong Kong Team to teach on innovations and exemplary nursing care in this important area. With this aim, the EAUN, CUAN and UNAHK team jointly designed and implemented an educational programme for the urology nurses in Hong Kong, Guangzhou, Hefei, Beijing, and Tianjin over a nine-day period. China, with its geographical size, required a schedule that was intensive with shorts stops and long hops (journeys) to the five centres to reach the maximum number of nurses in this short timeline. 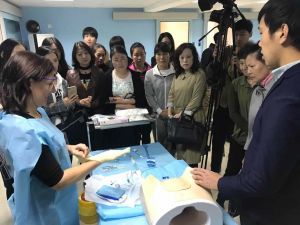 Interactive workshop in Tianjin being podcasted

Paula and Lawrence delivered state-of-the-art lectures on the UK experience regarding the diagnostic pathway and bladder cancer management, which included nurse-led diagnostic and follow-up clinics and the management of intravesical treatments.  The EAUN lectures in Hong Kong and China (Guangzhou, Hefei, Beijing, Tianjin), were attended by 1048 local delegates, but this year the organisers used cutting-edge technology to reach out to thousands of other nurses who were not able to make the long trips to these cities. This had a large impact, the lectures were podcasted in real time and 56,000 nurses and doctors registered online to watch it live. An amazing number, which would take most lecturers their whole career (or a lifetime) to reach, but China does have a very large population and a large number of urology nurses who are interested in education!

”… the lectures were podcasted in real time and 56,000 nurses and doctors registered online to watch it live.”

Paula and Lawrence also ran four workshops (Hong Kong, Guangzhou, Hefei and Tianjin) on the safe administration of intravesical treatments, closed systems and safe handling of any spillage; these were hands-on workshops where 418 nurses attended.  They also ran sessions on flexible cystoscopies, handling of the equipment, anatomy and pathology.  The sessions were interactive and the delegates feedback was extremely positive, from the podcasts alone there were over 2,400 responses from the participants. 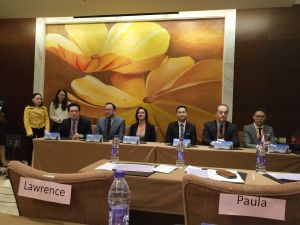 Besides the lecture tours and workshops, the EAUN/CUAN/UNAHK collaboration is keen to develop a lasting legacy in China and Hong Kong to facilitate urology nursing and have set up a number of Nursing Education Centres throughout China. This elegant model has been producing great benefit by locally enhancing the care that patients receive. On this trip four training centres were officially opened in Beijing, Hefei, Tianjin and Guangzhou besides those opened in previous years in Hong Kong and Hangzhou.  These new centres further demonstrate the strong connections between Europe, Hong Kong and China and their shared enthusiasm for high-quality education. At the opening, Paula gave five inaugural speeches at each centre on behalf of Susanne Vahr Lauridsen (Chair of the EAUN), highlighting the importance of the global work going on and, in particular, the guidelines that the EAUN have developed for Europe that are now being used internationally. 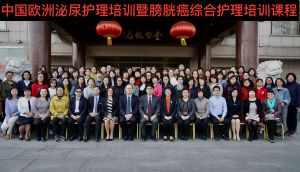 The schedule for this work has been impressive and the impact of this collaboration reflects well on all the three societies (EAUN, CUAN & UNAHK). Importantly, it shows that the aims and aspirations of the EAUN synchronise well with other National Nursing Societies as they provide nurses with the tools, platform and framework to deliver high standards of care.  The EAUN is justly proud of the fact that it produces evidence-based guidelines that are being used globally and it provides standards for training and practice, for European urological nurses, that can be a guide for other countries.  The EAUN has grown into an organisation that is keen to work with other countries to nurture nursing excellence in urology to improve the care patients receive worldwide. This trip reached an incredible number of nurses in such a short time and the organisation for next year has already begun.