At the 20th International EAUN Meeting in Barcelona, we presented a poster describing a study conducted in our hospital in Milan, aimed at investigating the self-care levels in ostomy patients and caregivers using two new indexes, validated in Italian.

Patients with an ostomy have to face great challenges on physical, emotional, psychological and social level. We, as health-care professionals, play a key part because we support adaptation, we encourage patients to be involved in stoma care directly and we create the best conditions to promote effective self-management. There are over 72.000 people in Italy currently living with an ostomy.

Aim of the study

The aim of our study is to describe the levels of self-care in ostomy patients and their caregivers using two new validated tools: the Ostomy Self-Care Index (OSCI) and the Caregiver Contribution to Self-Care in Ostomy Patient Index (CC-OSCI). The OSCI is composed of four scales: assessing self-care maintenance (daily behaviours implemented as a routine), self-care monitoring (ostomy and peristomal skin monitoring), self-care management (identification of complications and the response to it), and self-care confidence (confidence in personal abilities, in order to be involved in the self-care process). The CC-OSCI is composed of the first three scales of OSCI. There are 33 items for the OSCI and 23 for the CC-OSCI, with their proper indicators (self-completed instrument rated on Likert scale 1-5); for the two indexes, the increase in score is directly proportional to the adopted self-care level. 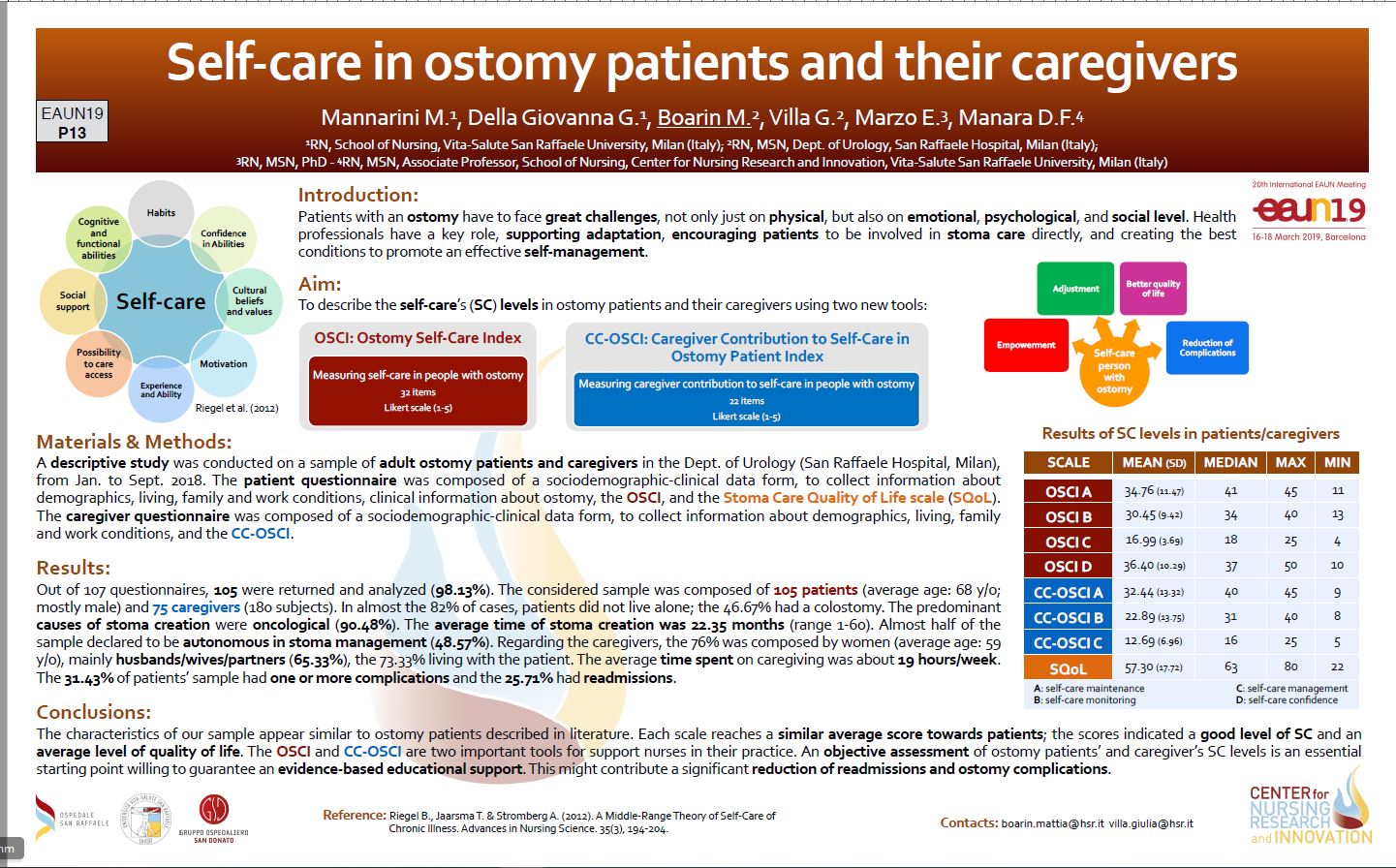 We conducted a descriptive study on a sample of adult ostomy patients and their caregivers in our Department of Urology. The questionnaire subjected to patients was composed of a sociodemographic clinical data form, to collect information about demographics, living, family and work conditions, clinical information about ostomy, the OSCI, and the Stoma Care Quality of Life scale (Stoma-QoL), a specific instrument commonly used to assess quality of life in ostomy patients and validated in the Italian context. The Stoma-QoL consists of 20 items based on four domains: sleep, sexual activity, relations with family and close friends, and social relations outside family and close friends; every item uses a 4-point Likert scale ranging from “always” to “not at all.” The caregiver questionnaire was composed of a sociodemographic-clinical data form, and the CC-OSCI.

Out of 107 questionnaires, 105 were returned and analysed (98.13%). The sample considered was composed of 105 patients and 75 caregivers, for a total of 180 people. Patients were 68 years old on average and mostly male. The majority was married (56.19%), with an average of two children each. In almost 82% of the cases, patients did not live alone, and most of the patients were retired (80.95%). Regarding clinical data, 49 people (46.67%) had a colostomy. The predominant reason why the patients needed a stoma was oncological (95, 90.48%). The period the patients had a stoma was about 22.35 months (range 1-60) on average. Almost half of the patients declared they were autonomous in stoma management (48.57%). Out of 105 patients, 33 (31.43%) had one or more complications and 27 (25.71%) had readmissions. In order to assess whether the scales could detect the difference in Self-care in ostomy patients and their caregivers incidence rates of complications or readmissions according to self-care behaviour, we examined the differences in self-care scores between patients experiencing complications or readmissions and those who had no adverse events. All scales showed statistically significant differences in the presence or absence of complications or readmissions (p < 0.0001 in all scales).

The average age of caregivers was about 59 years (range 45-73). The sample consisted of 76% women; the recruited caregivers were mainly husbands/wives/partners (65.33%), and in 73.33% of the cases, they lived with the patient. Finally, the  average time spent on caregiving was about 19 hours per week. After analysing the scores achieved by our sample by using the two indexes, the median of the patients’ answers turned out to be mostly 4 or 5, indicating that data values are positioned around those scores. This shows a good level of self-care. For quality of life, the mean of the Stoma-QoL score was 57.30 ± 17.72. Such values indicate an average level of quality of life, because the score has a theoretical range between 20 (worst possible quality of life) and 80 (optimal quality of life).

We can conclude that the characteristics of our population sample appear not to be significantly different from ostomy patients described in literature. Each scale that we used showed a similar average score with regard to patients; the scores indicated a good level of self-care and an average level of quality of life. The OSCI and the CC-OSCI represent two important tools to support us in our clinical practice. The objective assessment of self-care levels in ostomy patients and their caregivers is an important first step in clinical management, in order to guarantee evidence-based educational support. This might contribute to a significant reduction of readmissions and complications.

Complete references of this article are available from the EUT Editorial Office. Please send an e-mail to:
EUT@uroweb.org with reference to the article “Self-care in ostomy patients” by M. Boarin, June/July issue 2019.