Sleep-related painful erections are a very rare condition in men. Over the last 2 years, I have seen the condition only 4 times.

No treatment
Sometimes nightly erections become painful. The reason why remains unclear. Men wake up during the night because of the painful erection and cannot fall asleep again unless the erection disappears. Case studies describe that the erection sometimes starts again after lying down once again. One of the men in my practice told me the same thing. There is no well-described treatment with enough evidence behind it. There is no EAU guideline for this phenomenon. But I would like to give you some insight. I have used the PhD booklet by Dr. Sanne Vreugdenhil (NL) with great pleasure. She did her promotion on pathological erections and delivered a great overview.

“SRPE are difficult to diagnose because the patient should sleep with NPT-R measuring equipment.” 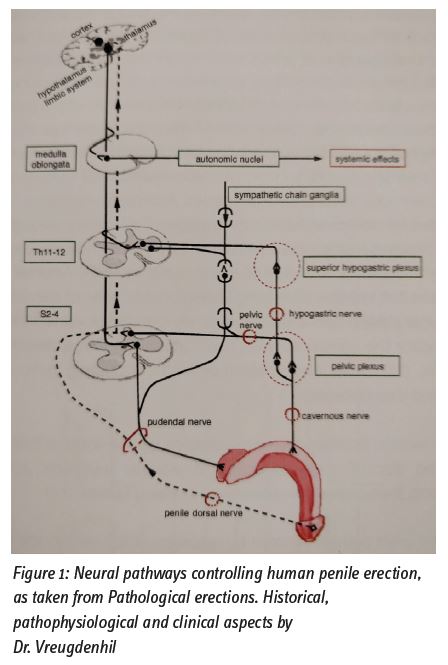 Physiology of erections
The erectile process is complex and requires relaxation of the smooth muscles in the corpora cavernosa and correct functioning of the parasympathetic neurovascular bundles which arise from the 2-4th sacral spinal cord. The neurotransmitter nitric oxide NO) facilitates the relaxation of the smooth muscle and is catalysed by NO synthase. When the arteries and sinusoids fill with blood, the veins are compressed against the tunica albuginea. In the end, the arteries will also be compressed because the inner blood pressure rises to 100 mmHg. This will create a maximally erect penis. The pelvic floor muscle bulbospongiosus and ischiocavernosus muscle play an additional role in further rigidity. The exact way this works remains unclear.

“There is no well-described treatment with enough evidence behind it. There is no EAU guideline for this phenomenon. But I would like to give you some insight.”

Detumescence of the erection starts with the sympathetic nerve system, which stimulates contraction of the smooth muscle inside the corpora cavernosa. This pathway starts from thoracic 11th to lumbar 2nd spinal cord level. Norepinephrine is the principal neurotransmitter to maintain flaccidity and stimulate the adrenergic receptors. In figure 1, the whole neurological pathway is shown.

Sleep-related erections (SRE) and REM sleep
The relation between REM sleep and SRE was first described in the fifties of the last century. Sleep-related erections appear throughout the lives of men,
even when they are children. The cerebral cortex plays an essential role in the occurrence of SRE. When only the brainstem is left in rats, SRE disappears but the REM sleep remains intact. It is believed that intermittent nocturnal filling of the corpora cavernosa provides better penile tissue oxygenation. It may, therefore, prevent erectile dysfunction by preventing fibrosis of the penile tissue. In the past, it was assumed that testosterone plays a role in SRE. Androgens would attenuate the noradrenergic neurons, causing a testosterone-related excitatory action to manifest the SRE. It is known that the testosterone level has an important influence on the SRE. The SRE will happen more often and last longer when boys enter puberty. When hypogonadal men receive testosterone replacement therapy, the rigidity of the SRE becomes more intense, lasts longer, and happens more often. Even the level of testosterone in the blood varies from non-REM sleep to REM sleep transition.

Sleep-related painful erections (SRPE)
The nocturnal penile tumescence and rigidity (NPT-R) can be measured using a Rigiscan® during the night and shows about 4-6 nocturnal episodes of erections.
SRPE are difficult to diagnose because the patient should sleep with NPT-R measuring equipment; polysomnography to register the REM sleep episodes and electromyography of the pelvic floor to see if it contracts. This is a costly way to diagnose the SRPE and is not performed regularly.

In the literature, only case reports about this disease are published, with the largest cohort consisting of 24 men in the group of Dr. Mels Frank van Driel (NL). Therefore, evidence is still lacking and the understanding of the pathophysiology of SRPE is still unknown.

Baclofen®
Several treatments have been tried over the years, but none shows very good results. Different medical treatment, such as a muscle relaxant (Baclofen®), different antidepressants, benzodiazepines, antipsychotics, anti-epileptic drugs, anti-androgens, beta-blockers, and PDE5-I, have been used. Even combinations of drugs have been tried and described in several case reports. The conclusion of Dr. Vreugdenhil et al. in their meta-analysis of SRPE is that Baclofen has the most promising efficacy and its side effects are acceptable (Vreugdenhil, 2018).